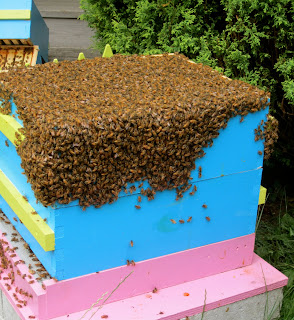 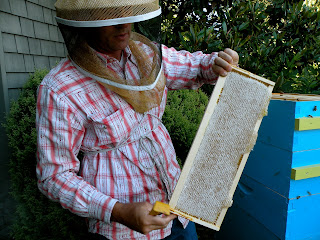 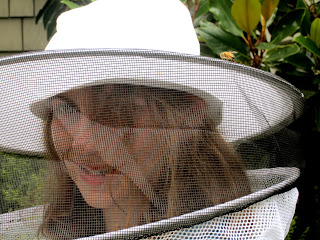 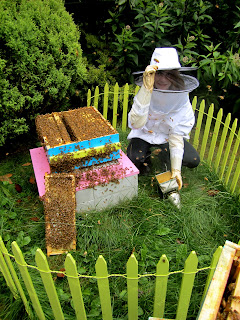 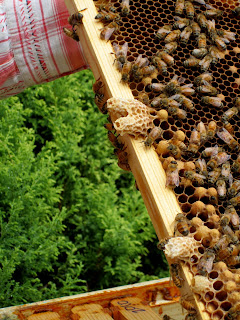 Swarm Cell
I have been so busy. Last week I went away to California for a big national track meet (in which I placed 7th in the 3000 meters and 3rd in the 1500 meters) and the week before I was at a cross country running camp. Also, Monday was my 14th birthday! So, I really had no time for the bees. While I was away in California with my dad, Corky and my mom ventured into the backyard and opened the hive without me. I heard that they pulled somewhere around 40-60 pounds of honey! Not this week, but sometime next, I will extract the honey! So exciting! Also, the bees were nice last week. Nobody got stung. I was told that when the bees got knocked into the grass they would climb up the long strands single file back to the entrance. Wish I had been there for that. Also, on more of a grim note, there were MANY swarm cells. I don't know why, probably because not enough space.
This week though, there were not as many swarm cells, but still a few. The bees were also nice, but at the very end they turned nasty! Corky got stung around 20 times. Ouch! We did not pull any frames of honey today, but did rearrange the boxes, for the queen was not laying in the first box. This week (Monday-Friday) I will be away again in Ashland, Oregon, so the bees will be on their own. Hope they are good!
-Audrey
Posted by Audrey at 7:49 PM