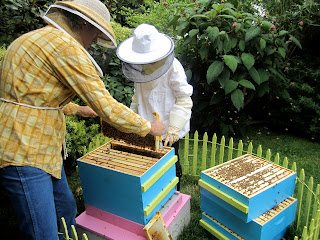 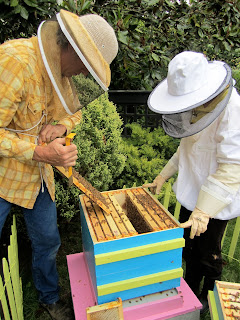 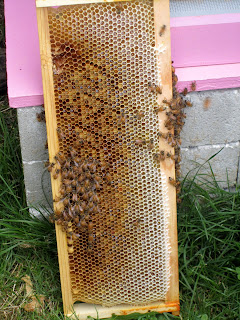 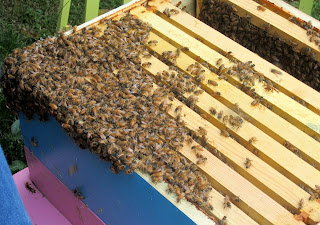 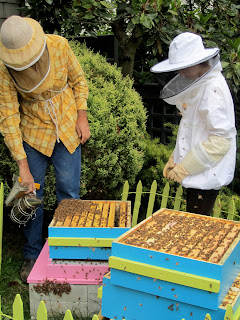 Last week I opened the hive to add the fifth box and switch the first to the third. The bees seemed very angry and kept slamming into my veil. From what I could see there were eggs in the second box, but I could not see any in the first box. I also did not see the Queen. I decided to switch the first box to box number three. That means the second box would become the first. But, when I tried to lift the first box, the box would not move. Both mom and I tried, but all we managed to do was pick it up with the bottom board connected to it. While we were trying to lift up the bottom box, we ended up shaking the hive/box, which created bee chaos. Finally, we just did not move the first box. I did add a fifth box, and pulled up three frames from the fourth box. By the end our smoker had expired and the bees were furious. One bee even followed us for about five minutes and into the front yard! My mom is still recovering from the experience!

Luckily, today the bees were calm. Corky came and we went through all the boxes. The fifth and fourth boxes looked good, but there were some queen cells (these are bad as they are a sign the hive might swarm) in the third and second boxes! We sliced them off fast. When we got to the first box Corky was able to lift it off of the bottom board, so we switched it to the third box. In the first box the bees seemed confused, and they would pour over the edge of the box. On the side I was standing they would march in a single file line back to the entrance! It was very odd. Two weeks ago I added two drone frames (drones are boy bees) in box four and three. The fourth box drone frame seemed full enough, so I took the frame out to freeze it, hopefully killing mites. The third box drone frame was not full, so I decide to keep it in there for another week. I also added a sixth box today. How tall is this hive going to get?

Yesterday mom was driving me to Seattle Pacific University (SPU) to go running. While standing outside I looked at my mom and sitting on her shoulder grooming itself was a honey bee! I am not sure if one of my bees had hopped on her shoulder and was there the entire time in the car, or if it was on a flower at SPU and just jumped on her. After a little bit the bee finally got off.

For Fourth of July weekend I am going up to Canada. I wish I could bring the bees, for they would love the mountain wild flowers, but I am not going to attempt to move them. Hope everyone has a nice weekend.