The Hive is Getting Taller 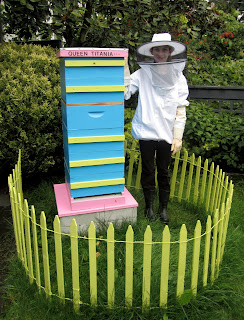 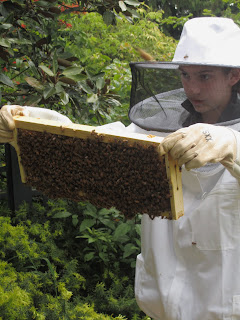 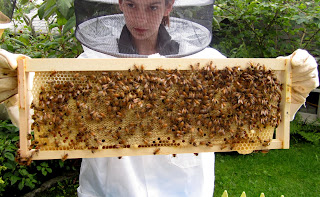 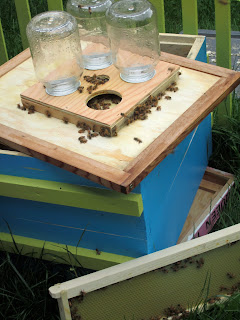 Last week I checked only the third and second boxes. I didn't dare look in the first box. The third box was about halfway full, so I decided next time, today, I would add a fourth box. An exciting thing that happened when I was checking the hive last week was that a bee somehow snuck into my veil. I was staring at a frame and just thought the bee was on the outside of it, but soon I noticed I was wrong. I quickly, but quietly, flung the hood of my bee outfit off and my mom tried to shoo the bee away. After a while it buzzed out without stinging me.
Today I added the fourth box, so the hive is taller than me! This is because it is sitting on a ledge about a 1/1.5 feet tall, then there are four boxes, and then two more boxes covering the feeders, and lastly the roof. Today I looked all the way to the first box. The hive is thriving. The queen is laying eggs very well, and I saw her today in the first box. I marked her on the day she arrived, but that green dot is starting to wear off. I am only to feed the bees one of two more weeks, then I am done feeding till the fall. The bees should fill this fourth box fast, so I may be adding a fifth soon.
Corky, my Bee Consultant, has appeared in several magazines about his bees and honey brand Bh. One magazine that he is in is the Seattle Magazine, and his honey is featured in Seattle Child. He is also going to appear in a PBS national show and has been on the radio. Congrats Corky!
Posted by Audrey at 6:08 PM