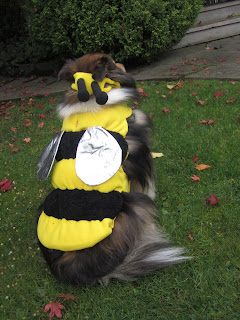 BOO!!!!
Sorry I have not posted for such a long time. School started, so I have been busy with homework (I have at least one quiz per week), cross country, and in my free time packaging honey jars. So, in this past month lots have happened, but I will try to summarize as short as possible.
Corky (from Bh Honey) had to open the hive with just my mom, as I was busy and so was he. But, the last time I opened the hive with him we saw that a queen cell had hatched! We think the old queen and new queen probably had a fight. The next week when the hive opened Corky saw eggs, so he concluded that a small swarm had happened, leaving the new queen to run the hive. All seems well in the hive, which is good.
Last week Corky and my mom opened the hive to get it ready for the winter. I have started feeding the bees again, but will stop soon. They are drinking a lot of the sugar water. The Volunteer Park Cafe is still selling my honey, so if you have a chance stop on by do.
These past few days there have been many dead bees next to the hive. When I e-mailed Corky he said that was normal. The rain has been bad for the bees, for they like the HOT weather. Well, will most likely open the hive just one more time before winter. HAPPY HALLOWEEN!
-Audrey
Posted by Audrey at 8:23 PM